Here's a picture of the AutoShop Rescue Truck: 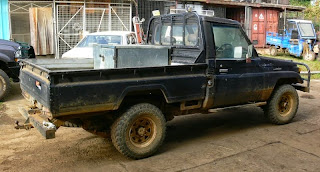 This is a late '90's Toyota Land Cruiser--this is the truck we have been using to go out and rescue people when they have breakdowns in this area.  In its day, it was a nice truck, but now it has 480,000 km on it, and those have not been easy kilometres.  I (Andrew) would estimate that 90% of that has been on rough dirt roads, and not everybody who has used it before us has been a careful owner.  It's missing various bits and pieces, (the driver's door can only be opened from the outside, for example, as all the interior door mechanism is gone), the home made tool box in the back has been broken into and is awkward to work around, the engine runs alright, but doesn't have as much power as it should, etc.  You get the idea.  Anyway, this old truck is getting to the point where it often breaks down when we are rescuing people, so we got the go-ahead to replace it.  We looked around at local options but the price for any new vehicle that could do what we needed it to do was astronomically high, and good used vehicles are very difficult to find here.  We carefully weighed our options and decided to go ahead and import a used truck from the USA.  So, after hours of searching eBay and various other internet car dealers, I finally picked out this 2002 Ford F350 4x4 from a Craigslist ad in Tennessee: 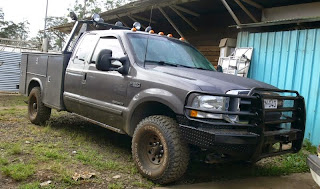 It has everything we were looking for: the good International diesel engine, a manual transmission, even a manual transfer case, and under 100,000 miles.  The utility bed was not something that we were looking for, but it is definitely a bonus.   Once purchased, the truck went to some of our colleagues in North Carolina to be outfitted for us in PNG.  Working within the budget I was given, I managed (working via e-mail from here in PNG) to specify all kinds of good stuff to put into the truck, including locking differentials in both axles, a winch bumper (the winch will be removed from our old rescue truck and put on to this one), better wheels and tires, work lights, a sturdy roll bar (made by our colleagues in NC), and a few other things.  We tried to make the truck as capable as possible for our needs while staying under budget, and I think we did pretty well.

Since it got here, we've already been using it a lot, and so far it has performed very well.  It's nice to have a truck that actually has enough power to safely pull our crash trailer and which has been set up to be hard to get stuck.  It's nice to finally have the right tool for the job!

In other news, July is going to be a busy month for me --in addition to my normal work as assistant manager/motorcycle and small engine mechanic at AutoShop, I've also got meetings in Port Moresby (capital city) for the Pacific Orientation Course Oversight Committee and then later in the month at least 2 weeks of Executive Committee meetings here in Ukarumpa.