When we are in the UK and the USA next year, one of our assignments will be to share about the Bible Translation work that's going on in Papua New Guinea. 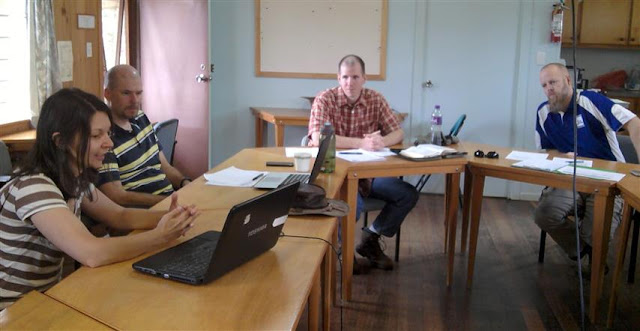 This photo shows the 'furlough workshop' I've been attending; my goal has been to come up with interesting and helpful presentations.  Gone are the days of the 30 minute slide show!  We'll be aiming to share in a way that's relevant to each group of people, and which gives others a chance to see how they too can be involved.

Do you know of people who would like to hear how God is using Bible Translation to change lives in Papua New Guinea?  If so, please get in touch.  This might be in your church services, small groups, Sunday school meetings, children's groups or schools.  Of course we'd love to share with you in your own home too!   Even if it's too early to work out the specific details, it would be helpful to find out about possibilities now, for planning purposes.

* We now have plane tickets!  I'm keeping track of and updating our itinerary here.  We appreciate prayer for good decisions as we prepare for our time away from PNG and that plans would come together well.

* Please pray for good times of transition for our children.  They are excited about the upcoming travels, but the idea of spending a long time away from the place they know as home can be unsettling for them.

* We would appreciate prayer for wisdom in our work, and that we would use our time well during the next few months that we have here.

Thank you so much for your valued partnership with us, expressed in many different ways
Posted by Clare Koens at 1:44 AM

I'll keep this post updated with our 2017 travel plans.  We'd love to see you!  Let us know if this might be a possibility

29 - 31 March: Visiting friends and family in the Midlands

1 April: Move into our flat in Haslemere

18 April: Start of school term for our children

10 May: Speaking in Stevenage

11 June: Speaking at The Stable, Barnet

?: Weekend trips to Upper NE Tennessee and other locations

January 2018: Fly back to Papua New Guinea via Australia
Posted by Clare Koens at 8:11 PM

And Now For Something Different

Last week the gospel reggae band, Christafari, performed in our valley, hosted by local pastors.  Around 5000 people from the local area came to the concert and heard the gospel message.

A lot of preparations needed to be carried out prior to the event, including building a stage from scratch.  Many of our friends were involved in the event in one way or other.

Can you see the bright light in the background, shining on the crowd?   This light is powered by its own generator, and is the kind often used at construction sites.  Andrew was involved in repairing the generator in the days leading up to the concert.

*We're still working with our travel agent on securing tickets for our 2017 furlough.  Thanks for praying about our travel plans; we now know which tickets we want to purchase.  We appreciate your continued prayer for the process of purchasing the tickets. (Making international travel plans always seems to end up being more complicated than we expect it to be!)

*We praise God that another motorcycle mechanic is planning to start working at Autoshop in the next couple of months.  Please pray that Andrew would have adequate time to train this new mechanic before we leave for our furlough in March.
Posted by Clare Koens at 3:00 AM

This photo was taken last time we were in the USA: 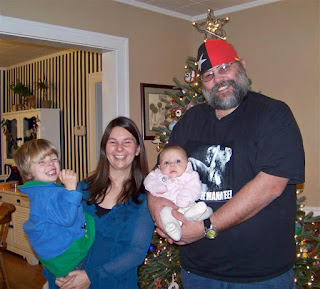 That was way back in 2011.  Clearly it's time to start planning another Home Assignment, so we're working on booking a trip to our home countries next year. In March 2017 we'll travel to Brisbane, Australia, where Eowyn has a check-up with the kidney specialist.  From there we'll fly to England, where we'll be based in Haslemere, Surrey, from April - July.  From August - December we'll live in North Carolina (where our organisation has housing), making sure we fit in trips to Tennessee and Florida.

We're looking forward to seeing as many of you as possible during our time away from PNG.  We'll also have the chance to take some training courses, have health check-ups, and make the most of opportunities for spiritual and emotional refreshment.  The children will get to attend school/preschool in their passport countries for the first time. (The little baby in the photo above will be in year 1/1st grade in 2017!)

Levi says he's most excited to see grandparents, while Heidi's aim is to ride a toy chicken on a merry-go-round!

If you would like to see us, please let us know!

We would appreciate your prayers as we start to plan and book our travel for next year.  There are so many things to think about including tickets, visas, clothing, speaking engagements, road trips, health insurance and preparing our house here.

On a different note, thank you for praying for the staffing situation at Autoshop.  We are very relieved that Andrew now has a temporary manager, and that the permanent manager is on schedule to return after Christmas.
Posted by Clare Koens at 8:47 PM 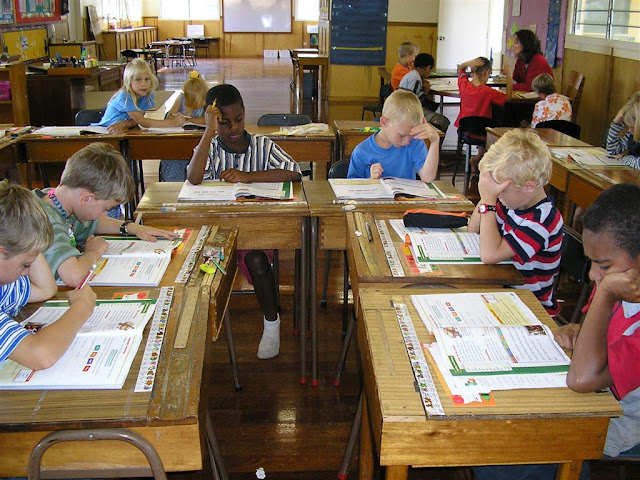 Tonight, many of those students will be graduating from UIS.  This is what they look like now: 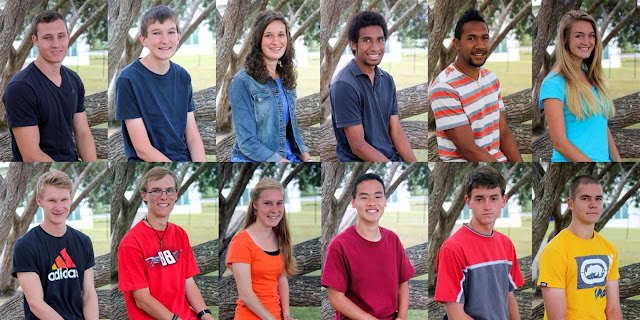 It has been wonderful to watch these children grow up into young men and women.  It's also very rewarding to think of all the ways their parents have been able to support Bible translation in the eleven years that I've known them.  Some did this by being directly involved in the completion of four New Testament translations.  Others supported the work in other ways: Planes that carry translators to remote locations were flown and maintained, students were taught, cars were fixed and the infrastructure of the Ukarumpa centre was maintained.

Next month Heidi will begin Kindergarten in the classroom shown in the top photo.  Levi will move to grade 2.  Just like the parents who have gone before us, Andrew and I will continue to support Bible translation in Papua New Guinea, knowing that our children are receiving a great education at UIS.

Thank you for the part you play in helping us to continue serving here.
Posted by Clare Koens at 6:14 PM 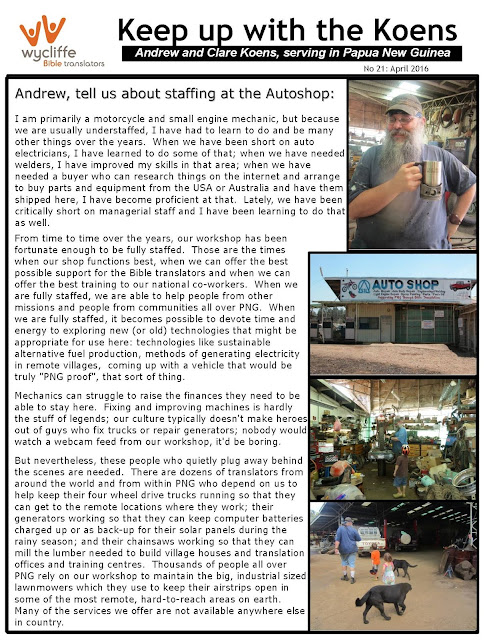 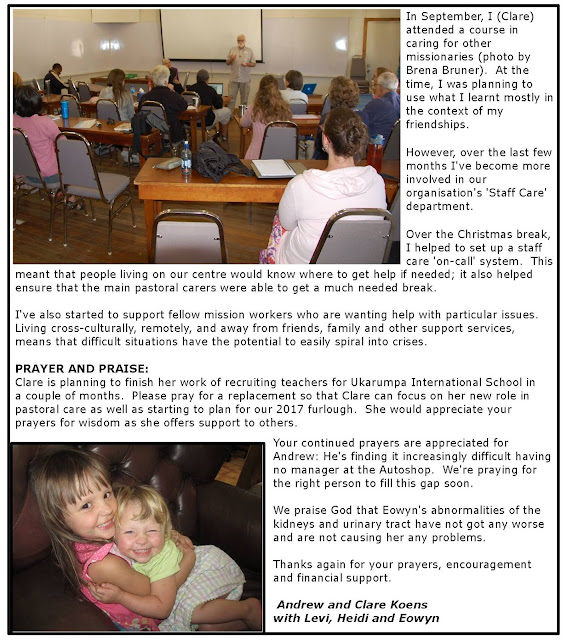 I (Clare) have been assisting a Papua New Guinea lady, Betty Orami, who runs a sewing class here in Ukarumpa for people from all over the local area. 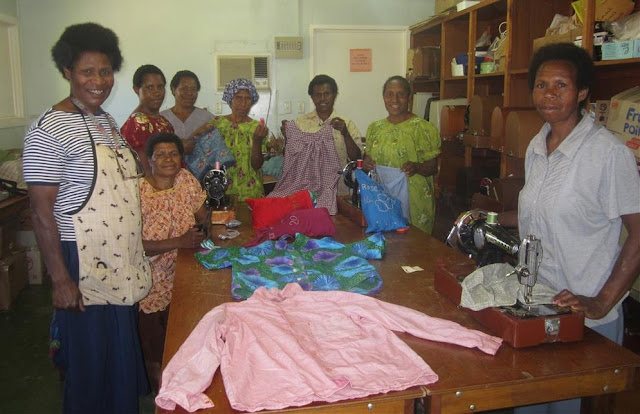 Betty (wearing the apron in the photo above) was employed by our organisation for several decades before retiring five years ago; when I first met her she was the cleaner at the high school here.  Towards the end of her time in that role she was asked to be one of the teachers at a sewing club for women from the surrounding villages.  Sewing machines were sent out to these villages, and one woman from each village was trained as a teacher.

These days, Betty runs and manages the sewing classes by herself.  She does this as a volunteer, believing that God has given her this work to continue.  To help support herself, Betty takes on paid work from members of the Ukarumpa community, such as sewing curtains or mending clothes.

I've been helping in a few small ways, such as bringing Betty sewing jobs from people in the community and producing the certificates for the 2015 graduation ceremony: 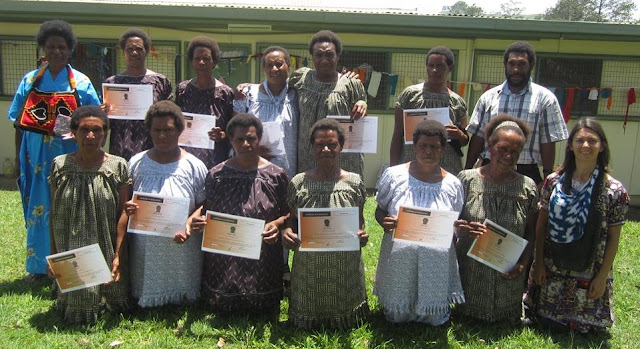 *Please pray for Betty as she runs these classes, and also that God would provide all the resources she needs.  Pray too for the people attending, that they would benefit both spiritually and practically from their time at the sewing class.

*From 9th - 14th March, Eowyn and I will be in Brisbane, Australia, so that Eowyn can have another ultrasound scan and see the paediatric kidney specialist again. Please pray that all the travel goes well, and for good results from the scan of her kidneys and urinary tract.  We praise God that Eowyn has had a very healthy year :-).

*Andrew has branch Executive Committee meetings from 4th - 10th March.  Please pray for wisdom for him and the rest of the committee during that time as they discuss various issues.  This will be an especially busy time for Andrew as he will be looking after Levi and Heidi while I'm in Australia, and also helping to hold things together at the Autoshop!   Please pray for stamina and encouragement for him.
Posted by Clare Koens at 2:17 AM

Effects of the Drought

In our updates over the last few months we've mentioned the drought that has affected PNG so profoundly.

Just before the drought started, we attempted to turn part of our vegetable garden back into grass: 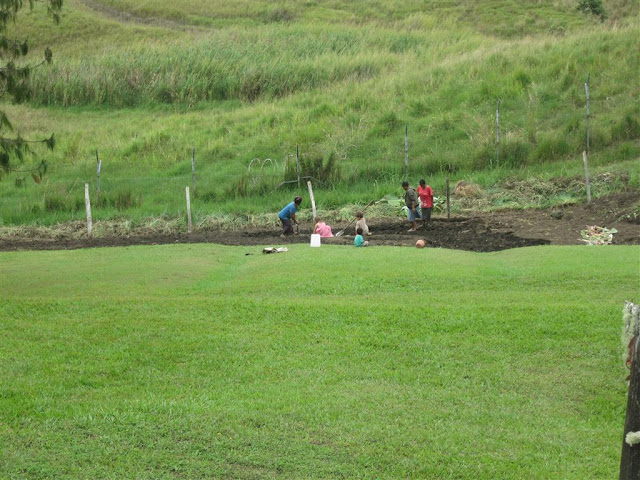 But it didn't rain for weeks.  The view from our house ended up looking like this: 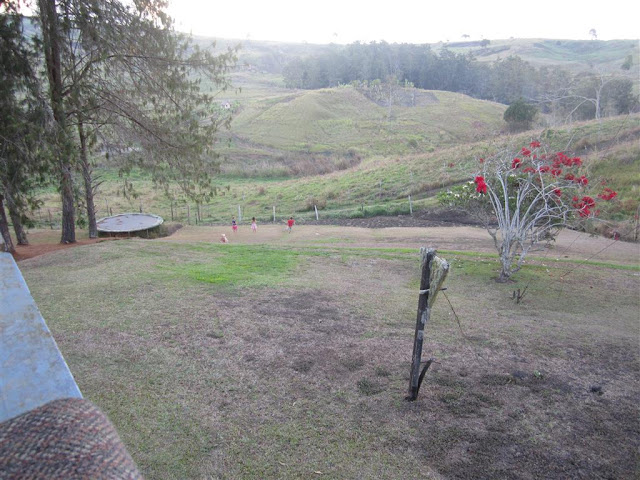 Of course the colour of our grass is not of great importance in itself, but it shows how much deviation there has been from the usual weather patterns.  This is the only time in our nine years of living in this house that the grass has been anything but green.

We are now well into 'wet season' and are happy to report that it has certainly been wet.  The grass is green again, and the new grass is finally starting to spread: 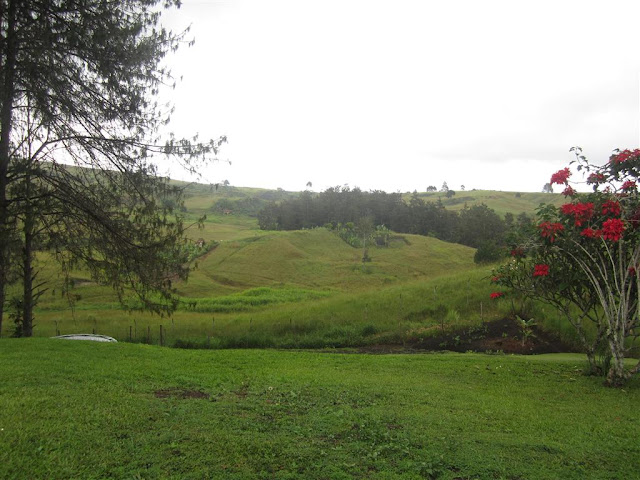 It is exciting to see our local vegetable market overflowing again with strawberries, cucumbers, beans and other faster-growing fruit and vegetables.  However we're aware that the people around us are still struggling to eat a balanced diet and to get all the nutrients they need.  It will be several more months before the staple food, sweet potato, is ready to be harvested.

The following picture is of the water tank at our house that normally stores our drinking water.  After getting emptier and emptier over a period of months, the tank started to rust.  Not only does the water now come out brown, but there is also a hole half-way up the tank, meaning that it doesn't get more than half-full.   At the moment we're drinking water from a tank that we filled with river water during the drought, so it's important that we filter it before pouring it into our glasses.  For more details about what it will mean to replace our water tank, see this informative blog post by our colleague, Catherine Rivard 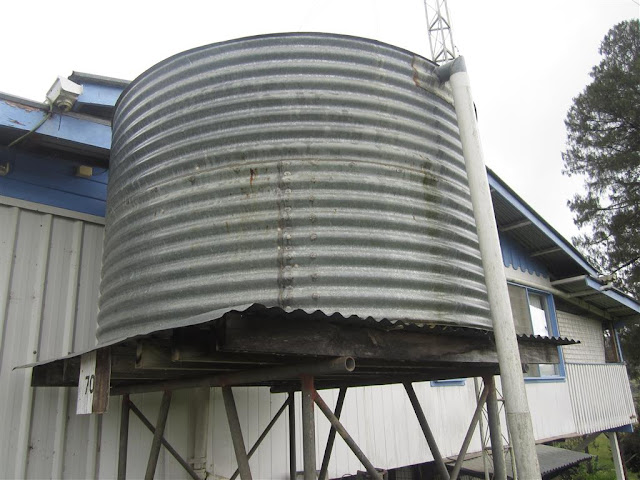 If you would like to pray for us, we'd be most grateful.  Here are some ideas:

-We continue to look to God to provide for our financial and practical needs, including a solution to our water tank issue.
-Many Autoshop staff are currently on home leave.  Please pray for those who are still here and covering a wider-than-usual range of tasks .
-We thank God that the second semester of the school year has got off to a good start for Levi and Heidi.  Two of their teachers will leave the country at the end of this school year; please pray for others to come and replace them.